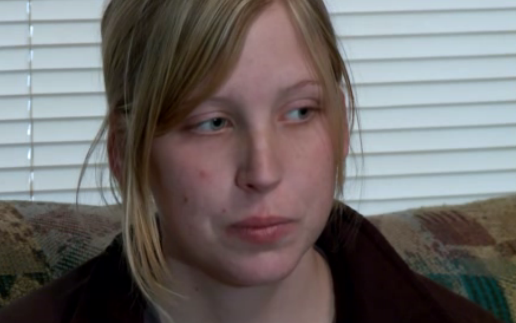 From the February 2012 issue of GunNews

(Guns Save Life) – At the January meeting, GSL President John Boch brought up the story from New Year’s Eve of Sarah McKinley from Blanchard, OK.  This 18-year-old mother lost her husband to cancer on Christmas Day 2011 and less than a week later, two opportunistic, armed thugs try to break into her home, probably to rape her.   She barricaded her front door with her couch, then got her shotgun, her baby and her phone and retreated to the back of the residence.

For twenty-one minutes she waited for police to arrive as the two men tried to force their way in through both doors.  Bad guy #1 was on the verge of breaching the front door when the 911 operator told Sarah not to shoot unless the intruder made it inside the house.  The bad man got in far enough to begin climbing over the couch when young Sarah McKinley perforated him with her boom-stick.  Amorous bad guy #2 suddenly sobered up and decided he had to be somewhere else and later turned himself in.

Boch spoke with the Blanchard police and they have nothing but praise for how McKinley handled the unfortunate situation.  “It doesn’t get much more righteous than this one,” a detective told Boch.

McKinley’s primary home defense gun, the shotgun, was taken for evidence.  “We’ll probably have it for at least a couple of months,” the detective said.

Mr. Boch and some friends decided to make a difference and make sure Sarah McKinley has a replacement home-defense shotgun.  Antonio Luna, a part-time adjunct staff instructor with Fortress Defense Consultants, made some contacts and lined up a gun.  The Blanchard police chief referred Mr. Boch to a trusted, nearby gun dealer, Nathan Morrison of KAIROS Services, LLC., and offered to send a squad to give Sarah a ride to pick up the shotgun once it arrived.

Everyone at Blanchard PD, from the chief down to the front desk clerk, expressed profound and sincere appreciation for any help we or others could provide.  “Anything you can do to help with be very much appreciated as that young woman is having a very difficult time right now,” the desk clerk told Mr. Boch.

Mr. Luna secured most of the money needed for a bare-bones Remington 870.  A day later, at the Tuesday evening GSL meeting, Mr. Boch asked GSL members to help come up with a $100 to $150 in order to trick out the shotgun with a side-saddle, sling and to take care of any incidental costs.  After Boch started a hat around with $10, a few minutes later, GSL members came through with not one, but two hats, stuffed with $487.

The gun was test fired before shipping.  Ryan Stoy, of ZX Gun in Goshen, IN told Boch, ”I test fired the gun this afternoon. It’s a good gun. I built it up myself and it’s what I would want someone I care about to have.”

We (Boch, Luna, etc.) are weighing options for either giving McKinley a check for the remaining cash, or making arrangements to (legally) get her a personal defense caliber revolver.

There is a trust account set up to help Sarah McKinley.  If you missed the meeting and would like to contribute to help this girl have a better year in the Year 2012, here is the contact information.

>>Thanks to everyone who helped!<<

The original story from KFOR:

BLANCHARD, Okla. (KFOR) — An 18 year old Blanchard woman says she was forced to shoot and kill a man who was breaking into her home Saturday afternoon. Sarah Dawn McKinley was home alone with her three month old son at the time.

She says she heard a knock on her door and looked through the peephole to see two men, one of whom she’d met a couple times before.

“I saw that it was the same man. He had been here Thursday night and I had a bad feeling then,” said McKinley.

McKinley says she moved her couch in front of the door, grabbed her son and her shotgun, called 911 and went in a back room.

She says for an agonizing 21 minutes, she listened to the men try to break in.

Blanchard police believe McKinley acted in self defense when she shot and killed 24 year old Martin.

Sarah got her gun!

Guns Save Life helps Sarah McKinley get a new gun

Champaign, IL (WCIA (WITH VIDEO) – The Champaign County Rifle Association said it wanted to help a teenage mother who was put in a difficult position.  An Oklahoma mother shot and killed a man who broke into her home on New Years Eve.

Police took 18-year-old Sarah McKinley’s shotgun as evidence.  Guns Save Life President, John Boch, said he and other members in Champaign County, were moved by her story and didn’t want her to be without a defense.  The group raised about $500 and bought her a new shotgun.

“I’ve seen pictures of her picking up the shotgun she looked pretty happy and so I’m happy about that,” explained Boch.  “She had a terrible end of the year and anything we can do to make her life a little bit better we’re happy to do that.  It’s part of being a good citizen.”