Compare and Contrast II: Guns Save Life vs. CSGV 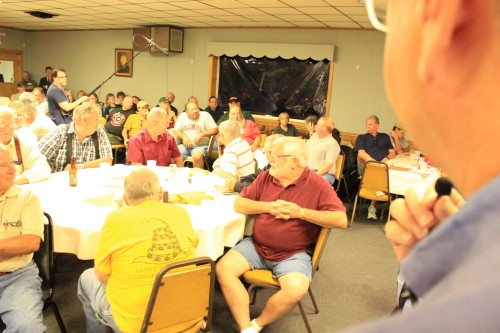 Miguel over at GunFreeZone had a nice catch he found from checking out the Coalition to Stop Gun Violence’s Facebook page (no, we’re not going to link to CSGV).

We will show you their pathetic picture.

How about that.  A protest in front of the White House and they turn out a dozen people?

That blog entry made the rounds and Sebastian at Shall Not be Questioned (formerly Snowflakes in Hell) tweaked that to a “compare and contrast” blog entry, comparing a 80-some people at a Friends of NRA dinner (paying $45 each to dine and bid on fundraiser auctions) to that farce that CGSV posted on their Facebook page.

Well, we would like you to contrast that tiny group of individuals who oppose freedom and liberty with the turnout of freedom-loving people we had at the regular monthly general members meeting of Guns Save Life in tiny Rantoul, IL  (pop. 12,984) on September 11, 2012, the 11th anniversary of the September 11th attacks.

Approximately 180 people turned out on that second Tuesday to learn about recent firearm rights news, hear from a survivor of the attack at the Pentagon on 9/11 who narrowly missed getting herself killed that day (that blog post is coming soon), to see Illinois Treasurer Dan Rutherford make a few comments as well as learning about buying a rifle from your Uncle (the CMP) and to buy chances to win a Remington 887 shotgun for dealing with asocial behavior.

So again, contrast the motley dozen from CSGV from the densely populated DC area with the scores and scores of regular Janes and Joes from sparsely populated Central Illinois that turn out each month in similar numbers for similar fun and upbeat meetings. 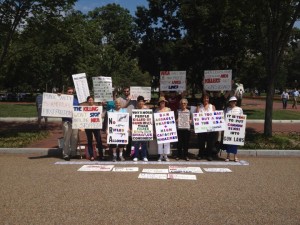