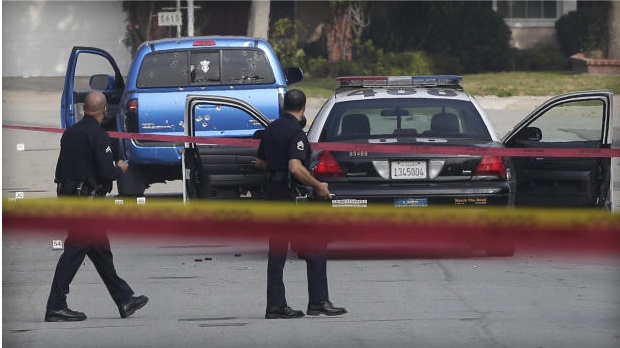 Inquiring minds would certainly like to see the video from the squad car involved where two LA Police officers rapidly and promiscuously opened fire on a pickup truck, thinking they had the far left-wing murderer Christopher Dorner in their sights.

If you or I had opened fire on a pickup truck whose occupants weren’t trying to run us over or shooting at us, we’d be in jail for a long time to come.

While police have a little additional leeway in using deadly force, it would seem this was a grossly inappropriate use of force and not only should the offending officers be charged criminally, but the department owes the victims a new pickup truck and probably a hefty check on top of that for pain and suffering.   Ditto for the homeowners of the freshly perforated home “downrange”.

In addition, check out that marksmanship — or lack thereof.

Attorney Glen Jonas said Maggie Carranza, 47, and her mother, 71-year-old Emma Hernandez, were delivering Los Angeles Times newspapers around 5:15 a.m. in Torrance when the officers opened fire on their vehicle.

Jonas said, “There was no warning. There were no orders. No commands. Just gunshots.”

…”The vehicle is a different color. The license plate doesn’t match. There’s nothing there for you to start shooting people. And even if they had the person in question… Mr. Dorner…you still have to give them an opportunity to get out. You can’t just start administering street justice,” said Jonas.

Carranza suffered minor injuries to her hand from shattering glass.

Hernandez, who was shot in the back, is in ICU at Harbor-UCLA Medical Center.

To make matters worse, it wasn’t the only shot up pickup truck that was fired on mistakenly!