MENTAL HEALTH and the Right to Keep and Bear Arms 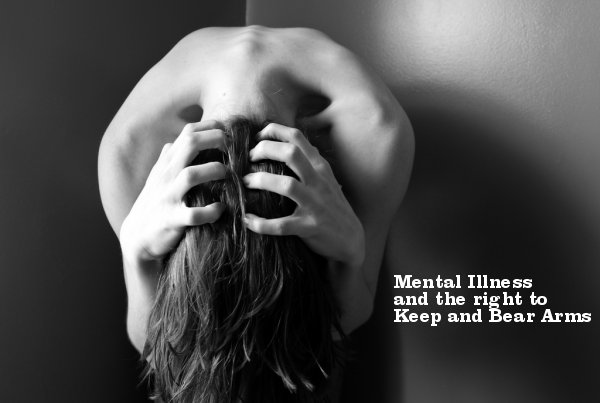 MENTAL HEALTH and the Right to Keep and Bear Arms

“Based on the percentages, it would seem that people who are not mentally ill pose the greater threat.”

By Anonomyous, an MD / PHD; a member of Guns Save Life

The Obama Administration’s next attempt to limit firearms rights has hit the stage.  This time, it is shrouded in the apparently laudable goal of keeping firearms out of the hands of “mentally ill” people.

So, what’s the problem?   The Newtown shooting was carried out by a young man with autism.  The Aurora Colorado shooter was probably schizophrenic.  One of the Colombine shooters was on anti-depressants.  You’ve heard the talking heads: Mentally ill people are dangerous!  These mass shootings are an epidemic and must be stopped!  Who in their right mind would not want to keep guns away from a mentally ill person?

Let’s take a couple of minutes, step back from the emotionalism and consider a few things.

What is mental illness?
Mental illness is a nebulous term that encompasses a broad range of psychiatric disorders.  For example – you just lost your job and feel sad.  Guess what?  That’s depression – a mental illness.  You are “worried sick” about your finances.  That’s anxiety.  Schizophrenia, autism, obsessive compulsive disorder, codependency, sociopathic behavior and bipolar disorder are all forms of mental illness.  Some people with these disorders are dangerous.  Others are not.

The trouble with the term “mental illness” is that it means different things to different people and carries many emotionally charged misconceptions.  Outrageous depictions of “mentally ill” criminals made popular by Hollywood and the media exacerbate this problem.

In the setting of a mass shooting or some other violent crime, if the perpetrator has a mental illness, people often assume the mental illness to be the cause and that “someone” should have recognized the danger and taken steps to prevent it.

What does the evidence say about that argument?

Based on the percentages, it would seem that people who are not mentally ill pose the greater threat.

In fact, there is ample data suggesting that mass shootings and violent crime are related to other factors, such as exposure to violent video games/movies [7] or drug/alchohol abuse.  Simply put, mental illness and guns have been present in the US for centuries. Yet, mass shootings were virtually unheard of prior to the 1960’s.

Will keeping guns away from mentally ill people prevent gun violence or mass shootings?
Several of the recent mass shooters were not allowed to possess firearms – but had them anyway.  The Newtown shooter tried to purchase a firearm, but was denied.  He murdered his mother and stole the guns before going on his shooting rampage.  The Charleston AME Church shooter had pending felony drug charges – preventing him from purchasing a gun.  He received his gun via an illegal straw purchase made by his father.  If someone wants a firearm badly enough, they will find a way to get one regardless of the law.

Almost all recent mass shootings occurred in gun free zones. Laws banning firearms were completely ineffective and actually created the conditions which allowed these mass shooters to commit their crimes.

Let me say this one more time: banning the firearms did not prevent the crimes.

Several states have passed laws to mandate reporting mental health data to a background check system.  For example, the State of Illinois will not issue a concealed carry permit to anyone with a psychiatric unit admission in the last 5 years.  There are two problems with this approach: there is virtually no data showing it works; and this standard tramples on the rights of many innocent, perfectly safe people on the off chance they can stop one spree killer.

Laws mandating health care providers report a potentially violent patient places these providers in an untenable position.  If they incorrectly report a patient, they ruin that person’s life.  If they fail to report someone who later commits a violent act, the provider is blamed and potentially held liable.

Glide path to national gun control
Recent mass shootings in the US seem to have one thing in common – someone with a mental illness turns out to be the perpetrator.  In the aftermath of each shooting, gun rights defenders invariably point to the mental illness to deflect public outrage away from the fact that a gun was used to murder innocent people.  They argue that guns are not the problem and that we need to work harder to keep firearms out of the hands of mentally ill people.

Blaming “mental illness” is not only incorrect, but also hands gun control advocates a powerful tool to pass legislation and regulations that can be used to put the USA on a “glide path” to national gun control.  Here’s how:

The electronic medical record (EMR) has become almost universal over the last few years, with health records from childhood and potentially from other sources, such as schools, military, alcohol/drug treatment centers, psychiatric care and many other sources becoming part of this lifelong record of your health and behavior.

The EMR will provide tremendous advantages for your doctor to understand your symptoms and improve diagnostic accuracy.

However, there is a huge downside to the EMR: The government has access to all of this data.

Can the information in the EMR be used to deprive someone of their firearm rights?  You bet it can!  Imagine walking in to purchase a gun and having your NICS check denied because you saw a psychologist for depression or because 20 years ago a social worker at your high school diagnosed you with violent antisocial behavior for getting into a fight?  At the very least, it will be very expensive for a private citizen to defend against the data stored in their own medical record.  All the gun grabbers need to do is make it so expensive that that no one can afford to defend themselves.

Deciding who is safe to possess a firearm
Should there be a list of specific mental illnesses that cause automatic revocation of firearms rights?

For example, schizophrenics have difficulty processing and understanding reality, affecting their judgment,  perceptions and reactions.  Mentally retarded individuals may not have the ability to understand a situation or make a reasonable decision.  Should we have blanket bans for these individuals?  How about someone who is very mildly developmentally delayed, but is able to hold a regular job and live independently?  Where and how do you draw the line?

How about something a little more complex:  autism.  Some autistic individuals are very highly functioning people, including college graduates and tenured university professors.  Others with autism are severely disabled and unable to interact appropriately with other people.  A blanket firearms ban for people with autism would deprive many perfectly safe, highly functioning people of their second amendment rights.

The current political situation
The Obama Administration is already using “mental health records” to implement the glide path to gun control on several fronts: the VA, the Social Security Administration and  the Congress.  The VA has been attempting to limit the gun rights of returning vets by declaring them incompetent and reporting this to the NICS system.  The Social Security Administration is attempting a similar tactic, proposing to label recipients with a financial fiduciary as incompetent and reporting this to the NICS system.  Finally, Senator Schumer has  introduced a bill that mandates reporting mental health history to the NICS background check system.

These proposals are nothing more than an attempt to circumvent the due process of law.  They turn innocent until proven guilty completely upside down.  Many perfectly safe/responsible people will be wrongly deprived of their rights if these proposals are implemented.

Worse still, these proposals will discourage many individuals from seeking the psychiatric help they need and codify a very destructive stereotype – that mental illness is something to be ashamed of – something that is dangerous or somehow makes you inferior.

The bottom line:
Evidence shows the vast majority of mental illness (including serious mental illness) has no correlation with violent crime or mass shootings.

Rolling mental health data into the NICS criminal background check system will put us on a glide path to national gun control.

Senator Schumer would have you believe that we need to keep guns away from all mentally ill people.  However, on close examination, his argument is reduced to emotionalism and demagoguery.   They are picking out and isolating a sub-population, attaching a vague label that instills fear, and then using emotions in lieu of logic to argue that we should give up our rights.

There are people with mental illness who are dangerous and should have their second amendment rights limited.  Our society has a mechanism for doing this – the courts.  No US citizen should be deprived of his/her rights without due process.