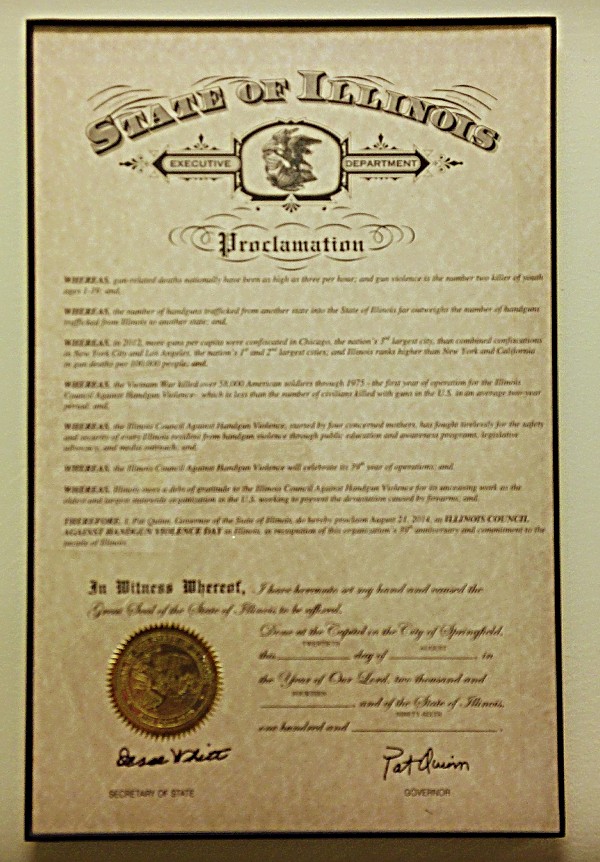 The ICHV group are long known as ardent opponents of civil rights in Illinois.

In other words, they are kind of like the Ku Klux Klan in that they work to keep law-abiding blacks from owning guns.  But they are more open-minded in their anti-civil rights work than the KKK.  ICHV doesn’t want just blacks to debarred the use of firearms, they don’t want any law-abiding person to have guns, regardless of skin color.  How’s that for progressively seeking diversity in your work?

Who is ICHV?  They are a handful of paid employees, suckling on the nipple of George Soros, Michael Bloomberg or similar freedom- and liberty-eschewing would-be plutocrats / oligarchs.  With their complicit and sympathetic friends in the mainstream media, they are able to magnify their relevance from completely insignificant to an almost insignificant nuisance.

Times haven’t been good for them these past few years.  While Guns Save Life has tripled in members, and quadrupled the number of meeting cities, ICHV has laid off most of their staff, closed their Springfield office, fired their lobbyist and cut hours.  Their long-time leader, Thom Mannard (sp?), bailed on them some years ago to go work for another non-profit.  We wish him better luck banning cancer than he had banning guns.

Worse than that, ICHV ineptly lost in their effort to keep Illinois as the final state banning concealed carry.

We find the State of Illinois proclaiming today ICHV day rather disturbing as we don’t believe Illinois should be lauding anti-civil rights organizations.  What will tomorrow bring from our Governor?  Perhaps the North American Man-Boy Love Association Day in Illinois?  Or perhaps the Westboro Baptist Church Day?

Something to think about  later if you haven’t already had your daily constitutional.