FONDLING TAURUS’ CURVE: Still the Taurus Turd? Not much has changed. 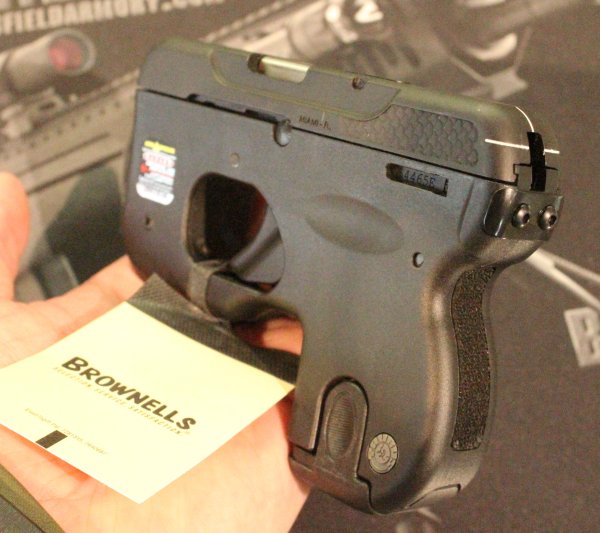 Guns & Ammo's staff raved about the new gun in a "first look".  Taurus called it "unprecedented", "one of the most groundbreaking firearms ever conceived", "world's first" and our favorite, for a gun without a traditional front and rear sights, "exceptionally accurate".

I called it "The Taurus Turd".  A moment of creative alliteration had single-handedly tarnished Taurus USA's big dollar media promotion of this new product.

Making matters worse were the legal threats from the Peoria-based magazine, which in a classic Streisand Effect, turned the story into a viral sensation.

It's likely than more people read the "Taurus Turd" story online from a host of blogs than read the original report in the January 2015 issue of the dead-tree publication, circulation about 416,000.

Realizing it was time to put down the shovel, InterMedia Outdoors' brass called with a more conciliatory tone, saying that they weren't going to sue Guns Save Life for what we published and we offered to pull the G&A photos we used.

They still seem to be angry, but more on that in a moment.

Just this week I found a Taurus Curve in the wild.

It was the first time I'd been at this particular gun store and the clerk just laughed when I asked if that strange gun was the new Taurus Curve.  His first words:  "It is.  I loved your 'Taurus Turd' piece, by the way."

He pulls it out of the case, shows clear for himself, and then for me, and hands it over.

"You know," he says, "there's no left-handed version."  That kills 10% of the market right there.

I fumble with the switch for the light/laser.  There's no momentary switch.  I finally got it on and was utterly unimpressed by the weak light emitted by a pair of LEDs in the front.  The laser was anemic as well.  Activating the switch, even playing with it for five minutes, was still neither intuitive nor did it work flawlessly.  If you're betting your life on that switch, you'll only have the rest of your life to regret your purchase choice.

I checked twice for clear and tried the trigger.  Nothing happened.  The Curve has a magazine disconnect.

I inserted the magazine and tried the trigger.  For a double-action semi-auto, the trigger was very nice and much lighter and shorter than my Keltec P3AT or KelTec P11.  It was easily the best double-action trigger I'd ever pulled on a Taurus product.  It was nice.

The downside is that lighter, shorter trigger would be easier to pull back unintentionally as you're stuffing it, Mexican-style, into your pants to carry it on the integrated clip. 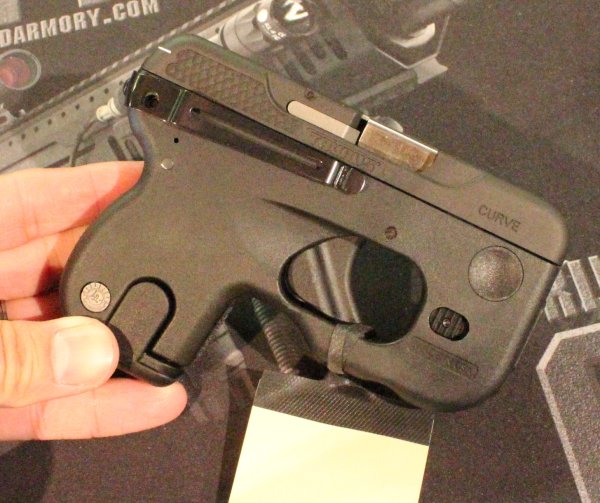 You've heard that Meghan Trainor song "All About the Bass", right?

As I was fondling Taurus' Curve, I was thinking of Jennifer Hast (of "In Jennifer's Head" fame) and her re-write of "All About that Bass" lyrics:

If you stuff this gun in your pants and something gets in that trigger guard, you could go boom boom in your shorts, scorching your private parts (unless you wear Kevlar bloomers).  Even worse, you might blow your femoral and bleed out.

The gun shop's manager agreed with my assessment that the Taurus Curve is nothing but a gimmick.  With no sights, a big and bulky frame for a 6+1 capacity .380 Auto, and no "momentary" switch for the light/laser.

Oh yeah, did I mention it's big?

Oh yeah, the gimmicks don't stop with the Taurus Curve's gun.  Even the box is gimmicky. 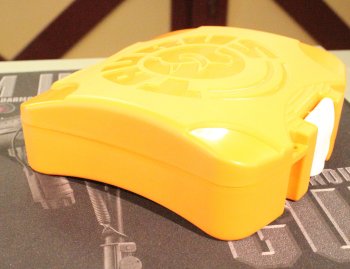 Guns & Ammo and the gun culture

Are Guns & Ammo employees really members of the gun culture or are do they just carry a grudge?

G&A, and roughly a half-dozen other InterMedia Outdoors publications, are based in Peoria, Illinois.  With something like seventy employees working out of the Peoria offices, we're surprised and then some that not a one of them has showed up at a Peoria meeting of Guns Save Life.

We've been there for two years or more, with up to one hundred people showing up each month for good food and fellowship.  Those present always learn the latest of what's happening in news and politics in the gun world, and hear guest speakers deliver great presentations.

It's grassroots gun rights activism at its finest, taking place literally on InterMedia Outdoors' doorstep, yet nobody from Guns and Ammo, Shotgun News or any other Intermedia Outdoors employees have shown up, much less participated, despite repeated invitations to come out and promote their company, products and writers.

We know that the Taurus Turd article stung them.

We'd like to make nice with InterMedia Outdoors.  Come out and join us at next month's GSL meeting in Peoria.  It'll be Thursday, April 2nd at Childer's Banquet Center.  Dinner and conversation at 5:30.  Meeting at 7:00.  We'll welcome a presentation from any of your people.  Or you guys and gals can just sit and enjoy the meeting as audience members.

And because I can, here is a reprint of the little ditty that’s been making the rounds on the Internet for years.  The author is unknown.  It's funny as can be.

Instruction From The Editor To The Journalist
Frangible Arms just bought a four page color ad in our next issue. They sent us their latest offering, the CQB MK-V Tactical Destroyer. I told Fred to take it out to the range to test. He’ll have the data for you tomorrow.

Feedback From Technician Fred
The pistol is a crude copy of the World War II Japanese Nambu type 14 pistol, except it’s made from unfinished zinc castings. The grips are pressed cardboard. The barrel is unrifled pipe. There are file marks all over the gun, inside and out.

Only 10 rounds of 8mm ammunition were supplied. Based on previous experience with a genuine Nambu, I set up a target two feet down range. I managed to cram four rounds in the magazine and one in the chamber. I taped the magazine in place, bolted the pistol into a machine rest, got behind a barricade, and pulled the trigger with 20 feet of 550 cord. I was unable to measure the trigger pull because my fish scale tops out at 32 pounds. On the third try, the pistol fired. From outline of the holes, I think the barrel, frame, magazine, trigger and recoil spring blew through the target. The remaining parts scattered over the landscape.

I sent the machine rest back to the factory to see if they can fix it, and we need to replace the shooting bench for the nice people who own the range. I’ll be off for the rest of the day. My ears are still ringing. I need a drink.

Article Produced By The Journalist
The CQB MK-V Tactical Destroyer is arguably the deadliest pistol in the world. Based on a combat proven military design, but constructed almost entirely of space age alloy, it features a remarkable barrel design engineered to produce a cone of fire, a feature much valued by Special Forces world wide. The Destroyer shows clear evidence of extensive hand fitting. The weapon disassembles rapidly without tools. At a reasonable combat distance, I put five holes in the target faster than I would have thought possible. This is the pistol to have if you want to end a gunfight at all costs. The gun is a keeper, and I find myself unable to send it back.

3 thoughts on “FONDLING TAURUS’ CURVE: Still the Taurus Turd? Not much has changed.”