ALWAYS CARRY: Even if it’s just to Walmart to grab some milk or to the gas station to fill up 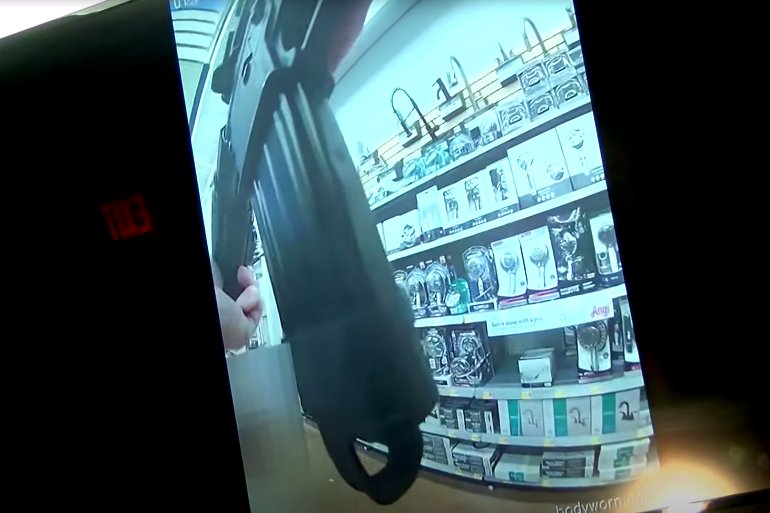 Always…Â ALWAYS carry your gun.Â  Even if youâ€™re just running out to Walmart to grab some milk, bread and bananas. Or a quick trip to gas up your car.Â  Carry your piece.Â  Bad guys and lunatics donâ€™t schedule their criminal attacks…Â  and they certainly don’t care about your plans before they commit their violence upon their fellow citizens.

An incident in Evansville, IN late last week drives that point home and should provide reason number eleventy bazillion why you should never leave your gunÂ at home.

Just before 10pm, a terminated Walmart employee named Ronald Ray Mosley the second – canned last May for attacking four of his fellow employees – walked into the store.Â  He had a whole lot of months to stew about the criminal charges he faced back then and the grudge he carried for what he perceived were misdeeds against him.Â

Whether or not he failed to take his anti-crazy pills is unknown.Â  Either way, knowing the time and location of the evening staff meeting, Moseley II showed up and shot one former fellow employee in the face and then took off after another he didn’t particularly care for.Â Â

Someone forgot to tell him that “Share the love” isn’t about hurting or killing people.

Anyway, unable to find his primary target, Crazy Ron returned to finish off his first and so-far only victim.Â  However a courageous co-worker helped the injured woman to another location where the staffer, now turned rescuer, administered first aid in the dark as the two hid from the would-be killer.

Cops showed up four minutes after the first calls for help and within a couple of additional minutes, they tracked down the killer in the hardware section of the store.Â  They shot him repeatedly after Would-be Homicidal Ronnie popped a couple of rounds at them.Â  Moments later, when the 25-year-old suspect tried to raise the gun again, cops shot him a lot more.Â  A whole lot more.Â  Right there in front of the showerheads.Â

What a terrible place to die, right?

Here’s bodycam video.Â  Not safe for work.Â  They pixelated most of the gore though.

The woman was the only person injured late Thursday when 25-year-old Ronald Ray Mosley II walked into a store break room where employees were meeting, specifically aimed at the victim and shot her in the face with a 9mm handgun.
Â
Sgt. Anna Gray of the Evansville Police Department said officers were in the building within four minutes of the 911 call, and Mosley was shot and killed by officers who tracked him down shortly thereafter. No injuries were reported among the roughly 100 officers from several agencies who responded. There were about 40 employees and 40 shoppers in the store at the time.

After the shooting, a male employee â€” whom Mosley was also targeting â€” ran out of the room, and Mosley followed him. Another female employee saw that Mosley had fled the room and called 911. She then ran back into the room to get the victim, take her into another room, locked the door and turned out the lights before Mosley returned looking for the wounded woman.

Evansville Police Chief Billy Bolin called the employee a hero and credited her with saving the victimâ€™s life.

â€śI have no doubt that he was going back to finish what he started and we would probably have a dead victim today instead of one thatâ€™s alive,â€ť Bolin said during a press conference Friday.

In this case, the bad actor – Mosely II – had certain people he wanted to end.Â  Fortunately he didn’t kill everyone he saw.Â  If you do have some lunatic who decided to go out in a blaze of glory, if you’re standing there and the best youâ€™ve got is a handful of milk and bananas when the shooting starts, thatâ€™s a bad day for you.Â  And your family if they’re with your.

Carry your GD gun.Â  You never know when it will save your life or that of another innocent in your immediate area.Â Â

Let the gun control advocates beg for their lives while on their knees in front of crazy and/or homicidal maniacs.Â Â

If you’ve got your gun, you can let Smith & Wesson do your talking.

3 thoughts on “ALWAYS CARRY: Even if it’s just to Walmart to grab some milk or to the gas station to fill up”