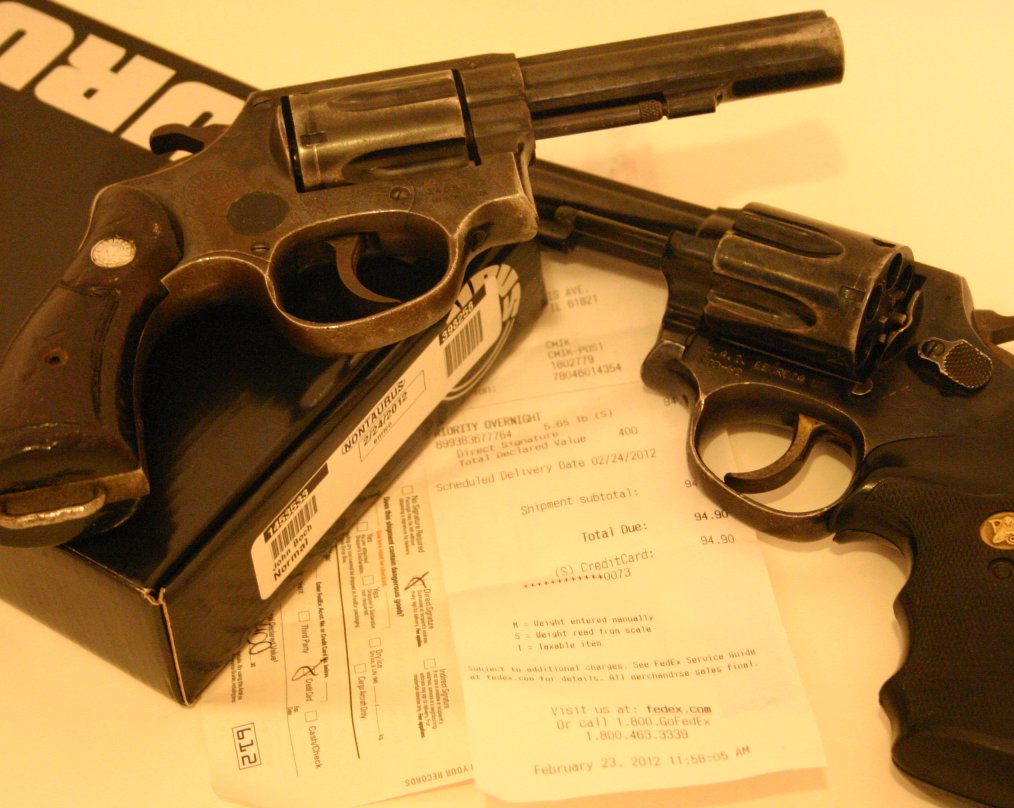 by John Boch
(Guns Save Life) – I saw an ad for used Taurus Model 82 .38 Special pistols for just shy of $200 each, out the door, in a recent GunNews and thought I might pick up a couple for loaner guns for training courses.  As these were Taurus’ copy of the 4” K-frame Smith & Wesson revolvers, I thought they would be a perfect complement for the existing Smith and Wesson K-frame guns we already have.

I pawed over about a half-dozen specimens at Liberty Guns and frankly, these guns were rough.  The finish was poor, the grips horrid and cosmetically, these were very ugly guns.

I selected a pair that seemed significantly better than the others.

We used them in our February class and we pulled them off the line almost immediately as they were spitting lead.

One of my fellow instructors noted Taurus’ lifetime warranty and urged me to contact them.  See follow on story for results on that…

In short, the guns I selected turned out to be barely functional.  Our students deserve far better than these beat-up clunkers.

Given how marginal these two guns turned out to be, I can only imagine how poor the other specimens were.

Dean Rothermel of Liberty Guns later told me he shipped three of the four others back to Century Arms as “unsafe”.  The fourth he decided to keep as a project gun, he said.

If you were considering purchase of one of these Taurus police trade-in revolvers from a dealer, don’t.

I’ve bought my share of used firearms over the years.  I have to say, these two Taurus 82s are the first junk I’ve gotten stuck with when buying used guns.

Don’t repeat my mistake with these Taurus 82s!

Taurus Service Guarantee:
Don’t believe everything they tell you

by John Boch
I called Taurus on February 16th and spoke with Mike at extension 259.  I explained to him that I picked up a pair of old, imported surplus Model 82s as loaner guns for NRA Personal Protection courses I teach with some friends, and that the guns purchased were rough: with cylinders that were binding, spitting lead and showing a fair amount of forward and backward play.  I asked him if they would honor their blanket, lifetime warranty even though these revolvers were not bought new and were Century Arms imports.

$94 and change later, the guns were on the way via FedEx.  I was excited that rough specimens might be turned into serviceable loaner guns.  They wouldn’t be sexy, but they would work.

Five days later, they arrived back with zero paperwork.  I inspected the guns and as far as I could tell there was nothing done.  Sure enough, some friends noticed the label on the end of the boxes that said “non-Taurus” and was circled.

I called Mike back the next day, seeking clarification on his cheerful encouragement to send the guns to Taurus for repair only for someone there to send them back to me untouched.

I’m still waiting for a return call after leaving a detailed message.

Update:  I spoke with the guys at the Taurus booth at the NRA Convention in St. Louis this year.  I explained my predicament and my disappointment in Mike at extension 259 telling me to send the guns on down for repair only for them to be returned without repair.

One gentleman overheard my conversation.  He came over and tersely told me that they weren't warrantying those guns as they were exported to Chile as police guns in the early 1970s (1972 to be exact if I recall correctly) and they were problematic, to say the least, and they were never intended for import into the US.

I asked the head honcho why Mike would tell me to ship the guns to Taurus if they weren't warrantying them – especially when I told him exactly what they were early in the call.

The head guy hands me his business card and tells me to send a copy of the shipping invoice to his attention and he would cut me a check to reimburse me.

I put his card in my pocket and upon my return home and unpacking a couple of days later, I looked more carefully at the card.  There were no names on the card.

Nice.  Taurus got me again.

One thought on “Product Review: Taurus Model 82 imports are junk”