Book Review: Once Upon a Lifetime by Carl Greenwood 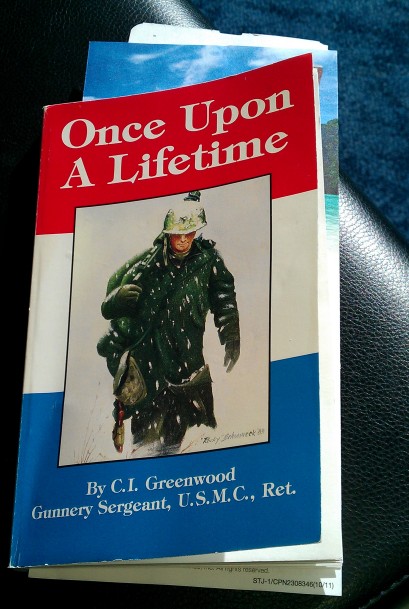 Once Upon a Lifetime by Carl Greenwood

by John Boch
(Guns Save Life) – Retired Gunnery Sergeant Carl Greenwood was our featured speaker at February’s Guns Save Life general meeting and wowed the audience with a great story of his time in Korea during his participation in the Great First Marine Division Breakout from the Chosin Reservoir in 1950.

What he didn’t tell us is included in his book, Once Upon a Lifetime.

If you thought his story to the audience was good, you’ll love his book which will leave you impressed with Greenwood’s great American success story that’s full of surprises.

The book opens with a reprint of a hand-written note of appreciation from the legendary Marine Col. “Chesty” Puller to GySgt. Greenwood.  That won’t be the only surprise you’ll find therein.

Included in the book is the story of how he joined the Illinois Militia during World War II at the ripe old age of 14.  He writes of the antics – and some of the amazing bravery – of fellow Marines he served with during his twenty-two years in the Marine Corps.

His book, comprised of short stories from different places and times in his service, offers a humorous and at times poignant look back.

Much of the book covers his service during the Korean War where he fought under Col. Puller, the most highly decorated Marine in United States’ history.  Puller himself is famous for the quote early in the Chosin Reservoir fight, “We’ve been looking for the enemy for some time now. We’ve finally found him. We’re surrounded. That simplifies things.”

Greenwood was also a senior drill instructor in his later years with the Corps and a very successful one at that.  There are some great stories from those years and later, you’ll laugh as he tells of how he used a bow and arrow to outshoot some “soft” Marine officers working at headquarters who were nowhere near proficient with their 1911s.

It’s a great book about Greenwood living the Great American Dream, first serving his country, then becoming a successful businessman with a lot of hard work after retiring from the Corps.

You can pick up an autographed copy at an upcoming Guns Save Life general member’s meeting for $5.  We have a limited number of copies available, so don’t delay.